Before I dive in to this week’s actions, I am pleased to announce that all the last weeks’ work is merged! However, something went hilariously wrong with the squash and the merge was re-merged with a new message, but however, with Jeremy as author. Trying to fix one mistake lead to another, but at least the commit message now makes sense, so I’m not complaining :)

This merge means you can now experiment with basic ptrace functionality using only basic registers and PTRACE_SYSCALL/PTRACE_SINGLESTEP. I have already opened the second PR in the batch: Ptrace memory reading and floating point registers support which will supply the “final bits” of the initial implementation, before all the nitpicking of final concerns can start (not to underestimate the importance and difficulty of these nitpicks - there are some areas of ptrace that aren’t even thought about yet and those will need tending to)! I will comment on these changes in this blog post, as there are some interesting things going on!

Accessing the memory of another process

This is perhaps the most interesting change of all. I had to learn about how processors handle memory: Each process/context has it’s own “page table” which translates parts (here “pages”) of “virtual” memory (in Linux and Redox, 4096 bytes long) to parts (here “frames”) of real, “physical” memory. This means that the pointer 0x12345 on one process will point to different data than 0x12345 will for another process. An exception is kernel memory, but only because all processes map that memory each syscall to a pre-determined address (the virtual address is still different from the physical one, so it’s not much of an “exception” really).

This paging memory is often portrayed as particularly complicatied - and it probably is - but luckily I only had to touch the basics.

My first successful approach to this was by attaching to the target process’ page table and somehow save the needed memory, perhaps by using the stack since kernel memory is hopefully mapped in both processes. That worked, but because the array was on the stack it could only transfer a limited set of bytes at a time. 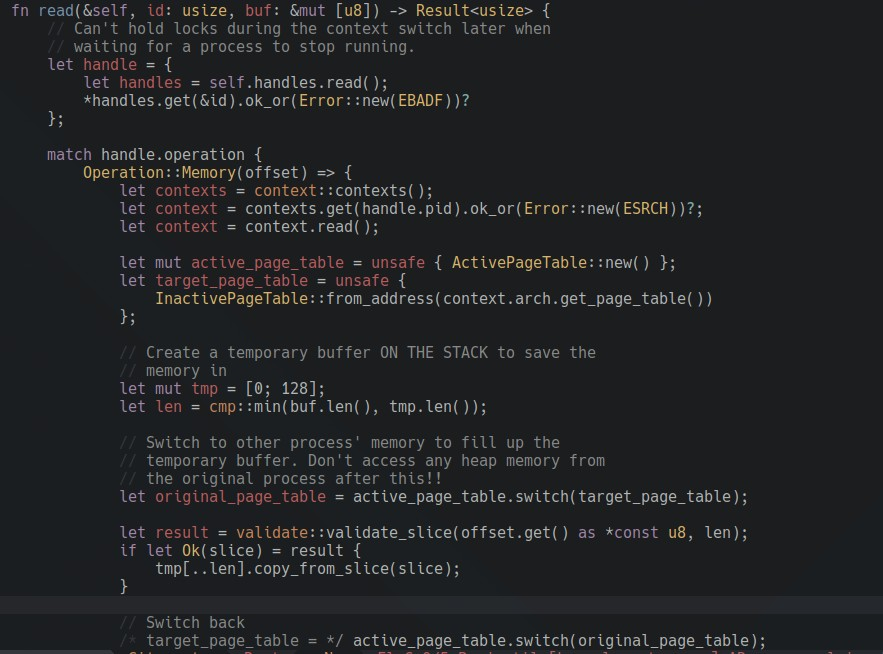 Then I talked to Jeremy, who told me the kernel would not support swap memory for a while, so a better way would be to find out the physical frame of the virtual page containing the requested address, and map it to the current process as well, translating all addresses. This was done here.

This was really easy for one reason: Jeremy also said the kernel will never touch the floating point registers of a context. So no new code had to be written to preserve these registers, they are already saved in the context switch. Since I also made the syscall floating-point struct memory-compatible with the x86_64 standard, the end product was basically just

with a bit of code to discard all the reserved bits to make sure the user doesn’t modify them.

An interesting bit here, though, is that the processor actually uses 80-bit floats. Therefore I got to have some fun to interpret these in the strace library

First, there are a few concerns I have myself which I will need to attend to in a later PR: 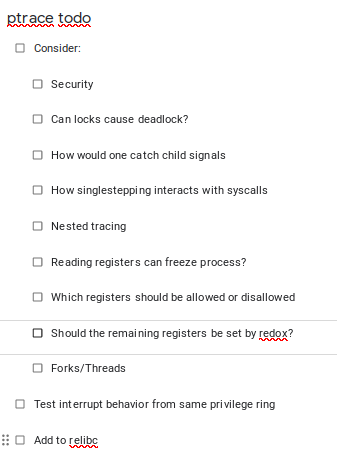 Help would be welcome over at the RFC (be warned: Redox GitLab does not seem to send notifications!), or any other way to contact me: Hoping I won’t get spammed to bits, I’ll leave my contact details also (I really need help with these considerations):

I’ve already gotten some help on the RFC which I am very, very happy about. People with Linux ptrace experience give a lot of valueable feedback about the shortcomings of the API and how the Redox API can be designed better. Even though the basic implementation is done, it’s intentionally programmed so the biggest lowest-level bits are separate from the main interface, which can therefore be replaced. It’s not too late!

Secondly, I’m working on a compatibility layer for ptrace over at the ptrace branch of relibc.