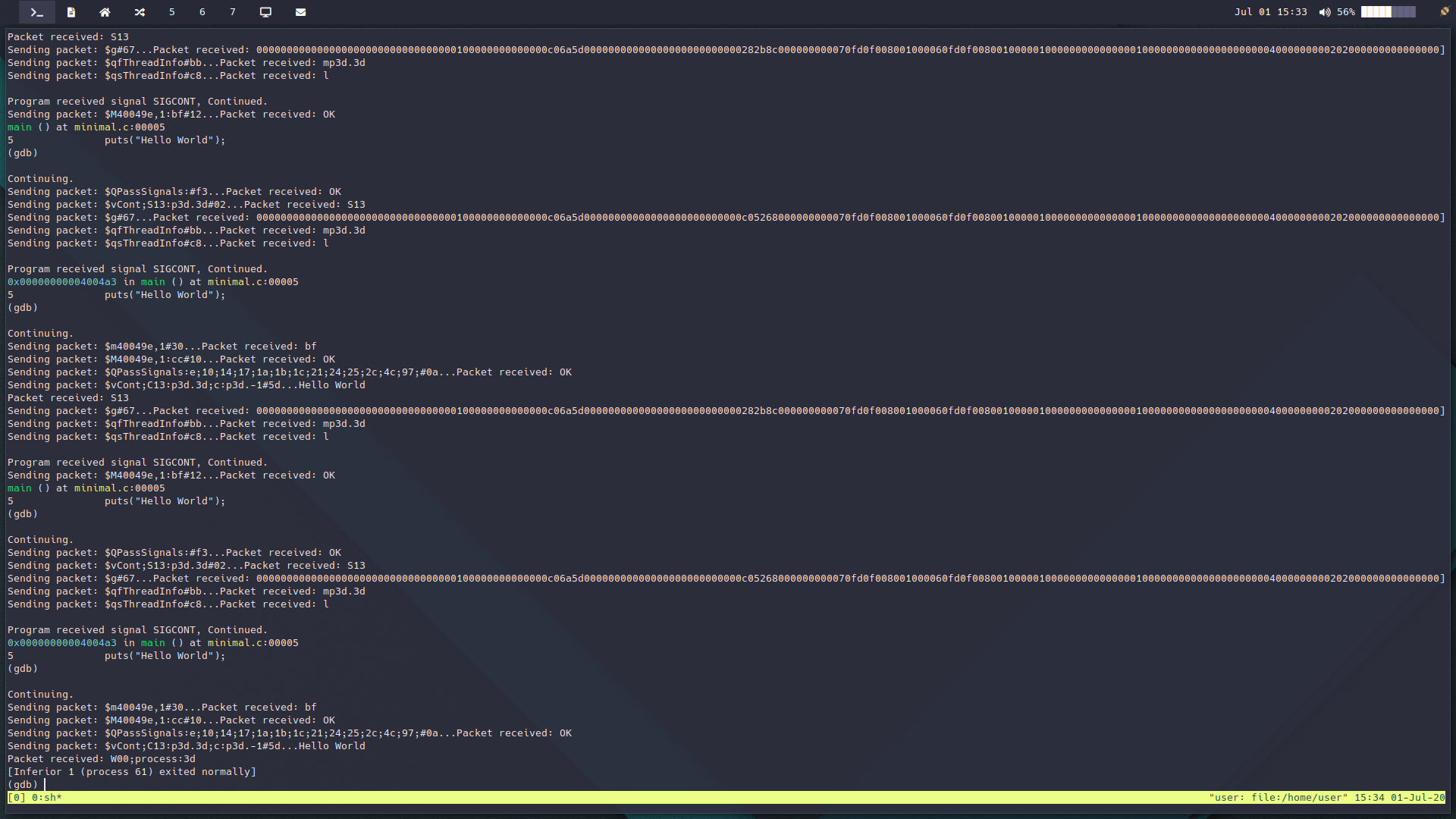 Yesterday at 15:08 I sent this image excitedly to the Redox chat, along with the message “Debugging on Redox… We’re soon, soon, there.”

You might notice how in this image, there are a few changes from the image of last week. There’s no split pane showing output - we only see GDB printing some mad ascii characters $ and #, as well as what looks like hexadecimal numbers.

What we see here is actually GDB debugging a program, running on Redox. Both the gdbserver that we’ve been creating, and GDB itself, is running on Redox. And they’re communicating using what both programs think is a “unix socket”. It’s actually our IPC scheme chan:.

If you remember from last week, the gdbserver I ran on Redox managed to crash the program being debugged. I let my mind take a rest after than, and then eventually came up with an idea: Why not use the gdbserver, to debug the gdbserver? I didn’t really do that, as cool as it sounded, I was still technically debugging the minimal C program that I made.

You see, gdb has some amazing built in tools to view the assembly being executed: x/<n>i <address>. x stands for reading memory, and i means format the bytes as assembly instructions. This worked amazingly well, and using x/10i $rip I was quickly able to tell that $rip laid in the middle of two instructions - and according to GDB’s debug logs, it laid exactly one byte after where GDB had placed an int3 instruction. If you’re unfamiliar with what all this means, just imagine that a compiler started compiling your code in the middle of a line instead of at the beginning. It would lose context, and throw so many errors! In principle, that’s what happened here, the instruction pointer was pointing in the middle of two instructions, trying to interpret things that weren’t meant to be interpreted.

The reason was that GDB assumed that we used a system like Linux, where a breakpoint caused the instruction pointer to step back one byte on breakpoint. Redox didn’t do that before, it never even occured to me - now it does, as it feels like the sanest thing to do: After all, even microkernels work towards minimizing syscalls, so let’s avoid that extra syscall that is 9.999⁄10 times going to be following a breakpoint exception.

So what then? We had a gdbserver running on Redox, ready for requests coming from Linux. In theory, GDB should be able to be compiled on Redox as well, and used to debug. So, to repeat, what should I do now?

Well, clearly, why let that “in theory” be theory, why not get GDB running on Redox now. Turns out, it wasn’t as painless as I had hoped. The processes couldn’t talk to each other over the netstack’s loopback address, for whatever reason, and little old me couldn’t figure out why! There were also a bunch of socket-related issues with relibc (I think most of them were caused by, uuh, let’s see here, me). So while I obviously tried to fix most of the relibc stuff, the whole tcp stack is very confusing to me and I felt like we could wait with that just a liiitle while longer. There has got to be an easier way.

Oh lookie, there is, I had just stumbled upon GDB’s ability to communicate over both unix sockets and standard I/O streams! Awesome! I got to work and thanks to a pointer from Jeremy Soller, who had somehow figured out that fixing the unix sockets would be easier than using I/O streams (which was true, the I/O streams used socketpair to set up unix sockets behind the scenes anyway), I managed to get the two processes communicating with a simple hack in GDB’s source code.

I also had to fix my target description XML file, apparently it was broken, but only GDB running on Redox would complain instead of just silently and magically trying to figure out what I meant. I’m really happy that was caught, but I’m also confused why GDB on Linux didn’t catch it. It turns out GDB wants me to interpret the ST(i) floating point registers as… well, floating point. Not the 80-bit integers they were. So I created the crate f80 (not yet pushed to crates.io) for this reason, to let me interpret these bytes using safe rust. I use some assembly magic there, but unfortunately the new assembly macro is too new of a Rust version. At that point, since there was already ongoing work to update Redox, I let all those registers be zero for now and will fix it later. 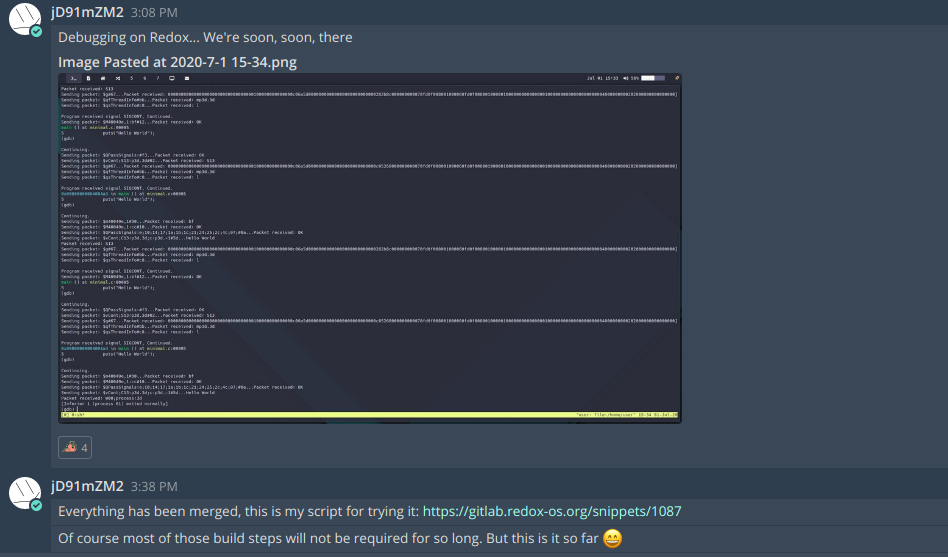 Excitedly, I had to tell everyone. GDB was now running on Redox, albiet with a presumably-broken floating point support. Not like anyone uses real numbers instead of just limiting themselves to whole numbers, right? Cough.

There is still some hackiness required to set up GDB. I use this script to launch Redox with example binaries and a script that ties gdb and gdbserver together. There’s also limited and potentially confusing process output - I might implement the protocol queries required to pass output to the host GDB.

But once the final polishing of our initial GDB support is complete, I might take look at implementing a library for more easily setting up a Redox scheme. I noticed lots of code is being reused in various places, and also I’m annoyed at how large and honestly confusing the chan: code is, even to me though I wrote it, for being such a simple thing. I want to fix that.